We wanted to do a free lemonade stand due to the fact the girls just wanted to do the stand for fun plus we have a neighborhood full of walkers, bike-riders, runners, stroller-pushers, and dog-walkers that do not carry change with them and we wanted them to enjoy a refreshing cup of lemonade and a cookie.

I began by looking around the house to see what we had that I might be able to create a lemonade stand with.  The first item I found was this little hutch that was my cousin’s when she was little.  She gave it to my girls and they use it along side of their little play kitchen and it is adorable.

We decided we were going to need more space for the lemonade dispensers and for the cookie tray so we decided to use their little second-hand table that we have had for more than 3 years.  The table looks a little rough due to the fact that my girls eat breakfast on this table, color and draw, play with play dough, play with slime, build things, have tea parties, all on this table.  We have many wonderful memories with this table don’t how we will ever part with it when they out grow it.

We used a cute pineapple tablecloth that I purchased at Wal-Mart for $2.  Of course with a lemonade stand you need a cute,  eye-catching, bright-colored sign,  we found the perfect one at hobby lobby.  I purchased it unpainted and decided to use paint that we already had so that I could stick to the budget.  I thought it turned out pretty fantastic!!!! 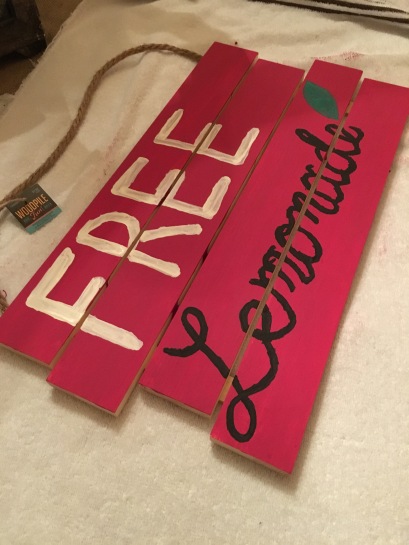 To display the sign without using poles stuck in the ground I decided to use two crates.  I am a little obsessed with crates because there are so many uses for them.  I may be a little more than obsessed.   The crates are also the glue that brings the two pieces of furniture together so that the lemonade stand looks complete.

Next we needed to get the lemonade stand set up and add our décor while leaving a space for the drink dispensers and a tray for the cookies.  I found this awesome little sign from Kirklands in the clearance section whoop whoop!!!! 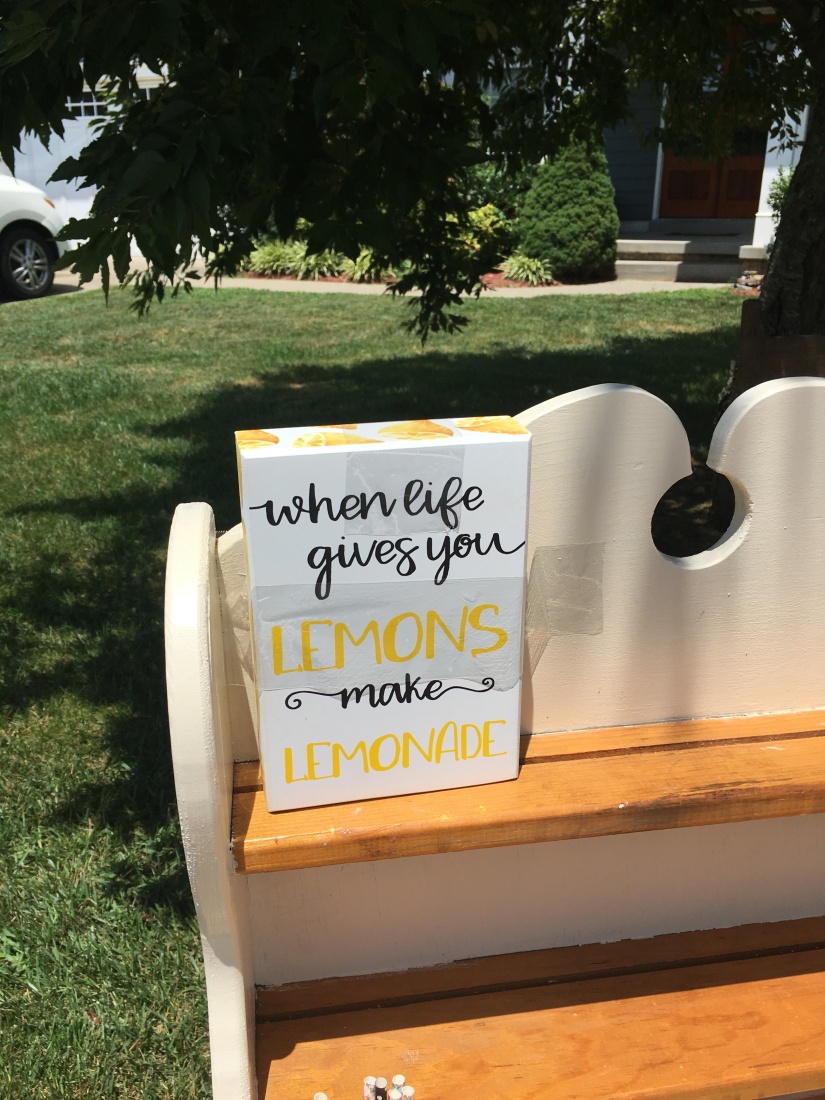 In order for the stand to look a little more shabby chic I decided to use an antique strainer that I have had for years and added some wooden lemons in it that I borrowed from my sister.  She uses lemons in her kitchen décor how awesome was that!!!

I also had some beautiful vintage-looking chic straws left over from one of the girls’ prior birthday parties they were perfect; I displayed them in a mason jar which is another one of my obsessions.  I LOVE MASON JARS!!!!

The girls also had an old toy telephone that had also been given to them by my cousin which they pretended to be taking lemonade orders over the phone.

For the final touches for our lemonade stand we picked out some chic napkins, clear plastic cups, our reusable $1 silver tray that we have been using for well over a year from the Dollar Tree. We used our cute drink dispensers that we already had prior to the lemonade stand , a cute pineapple table cloth that was purchased at Wal-Mart for $2,

a shabby chic flower arrangement that my mother was throwing away,  a small trashcan that we brought out of our house so that our customers had a place to put their cups and napkins. We bought large premade lemonade and berry lemonade drinks from the store for $2 a jug and added slices of lemon to it.  You heard me correctly we did not spend all morning squeezing lemons.  I am a full- time working mom on a budget and lemons are expensive!!!!.   I never said it was fresh-squeezed lemonade. 🙂 We also chose some lemon cookies that were less than $3 a pack and were delicious.

We then had to get our little lemonade-selling divas ready for show time.  We decided on pink tank tops ,pink aprons that we purchased from Hobby Lobby  a couple of years ago,  along with some yellow bandanas, and some super cute patriotic shorts that the girls wore for Independence Day purchased at Kohls..  We are ready !!!!!!!!

thank you so much for joining us.

Published by Lil Divas On A Dime

I am a Christian, married, hard-working, fashion-loving Mom who loves spending quality time with my family on a budget. View all posts by Lil Divas On A Dime